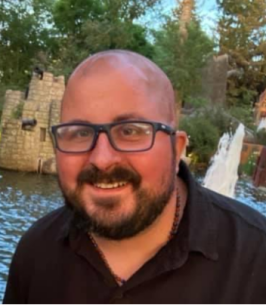 Alan Toby DeDominces passed away on April 21, 2022, surrounded by family and friends at the Tru Hospice Care Center; after a courageous six and a half year battle with Glioblastoma brain cancer. He was born to Richard and Cheryl DeDominces on November 11, 1980 in Superior, WI; where he was raised until he reluctantly moved to St. Cloud, MN in 2002.

Al married his high school sweetheart and the love of his life, Cameo on May 26, 2007. They have two amazing boys Cooper (12) and Tucker (9), who were the light of his life, even when they drove him nuts! While in St. Cloud, Al was an important member of the hockey community as the General Manager of Hockey Zone MN, a hockey coach, and a volunteer for a local non-profit for youth hockey. Al and Cameo followed their dream to move to Colorado in 2014, where they have built a beautiful life, community, and a family away from home. For the last five years, Al has worked for the Boulder Valley School District in various roles, where most recently had worked his way up to his dream job, as a buildings maintenance mechanic for the school district. Al loved the work he did in hockey and with the school district and was always proud of his strong mid-west work ethic.

Anyone who knew Al, knew he was not a man of many words, he wasn’t going to do anything until he was good and ready, had a smile that could light up any room, a dry sense of humor, and a calm (until he wasn’t) “it is what it is,” attitude. Most of all, Al was the true definition of what a fighter is! Al stayed involved as a hockey coach with Boulder Hockey Club, loved watching the boys in any activities they were involved with, fixing/building stuff in the garage and helping the neighbors with projects, he enjoyed doing legos with the boys, enjoying good beer and food with friends, he loved the Green Bay Packers and WI Badger Football, hunting with his dad and uncle, and most importantly traveling, camping, and spending quality time in the outdoors with his family. There is a lot we can all learn from the life Al lived!

Al is survived by his wife of almost 15 years Cameo (Rainaldo) and two boys Cooper and Tucker of Broomfield, CO, parents Richard and Cheryl DeDominces of Superior, WI, sisters Missy Capan of Eagle, CO and Stacie (Dano) Rozowski of Fredrick, CO, in laws Michael Rainaldo and Anne (Merl) Kitto of Superior WI, nephew Sean (Alexis), nieces Bekah (Brett), Maddie, and Lauren, a great niece Gianna, along with many special aunts/uncles, cousins, and many close friends he considered family. Al is preceded in death by all of his grandparents and a very special uncle, Jim Hegg.

The family will be holding a Celebration of Al’s life at the Dove House @ Lionsgate Event Center in Lafayette, CO on Monday, May 2nd at 6 p.m.-9 p.m. A service will be followed by a reception, to celebrate how Al would want us all to celebrate. An additional celebration will be held in Wisconsin in mid-July, more details to come. In lieu of flowers, the family requests donations towards supporting Al’s family in and beyond this difficult time or towards purchasing comfortable chairs for caregivers at the hospice center.

A special thanks to all of Al’s amazing medical team over the last six and a half years (Dr. Busby, Dr. Rajpal, the amazing rehab team at UCHealth Broomfield, and the wonderful people at the Tru Hospice Care Center). In addition, a huge thank you to ALL of Team Al, we could not have done any of this without you!