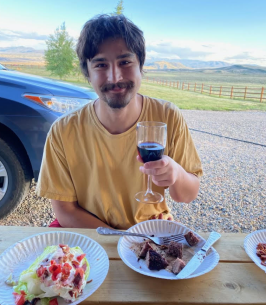 Alexander Joseph Nieczkoski, much beloved son and big brother passed away unexpectedly on Monday, March 14, 2022. He was 28 years young.
Alex, as he preferred to be called, was born a gentle and kind soul on July 6th 1993 to parents Stephen and Elena Nieczkoski. Alex grew up in Golden, CO, where he graduated from Wheatridge high school and then continued his education at the University of Colorado Boulder, where he studied Biochemistry. He was an intelligent young man and had an aptitude for math and science. He was named a member of the Phi Theta Kappa honor society while attending university for his excellence in academics. He moved with his family in early 2012 to a mountain home in the foothills of Boulder, CO.
He was an avid fisherman who loved living in Colorado and mastered fishing in its many streams. His appreciation extended to all kinds of animals and wild places introduced by his parents who would take him everywhere on wild adventures, fishing, camping, and traveling around the world since a very young age.
Alex could spend hours casting his fishing line into streams or lakes to catch fish, so focused that not even impending thunderstorms could drive him out of the water. On one trip to South Florida, Alex rented a rowing boat with his Opa and went fishing in the Everglades national park; so entertained by the fishing, they stayed out too long and ended up getting caught in the outgoing tide taking them to the Gulf of Mexico. Only super-human rowing efforts brought Alex and Opa back to safety. He also tied his own fishing flies, seemingly magical ones, as they were very successful attracting just the right specimen to his delight. Armed with this passion for fishing, Alex aspired to become a professional fishing guide and worked hard to acquire his fishing guide license.
He enjoyed driving his car in the steep curvy Colorado mountains. When he worked to buy his first car, he drove his Opa and Oma along one of his favorite routes, showing them the scenery that he so admired.
Alex also had a passion for plant ecology; he loved growing exotic hot peppers (the hotter the better) and he had a green thumb. He also had strong interest in music and art. He would experiment with writing and singing his own songs; he enjoyed playing the electric guitar and keyboards. On the artist side, he had a knack for drawing and painting different species of fish. He factored art into almost everything that he did.
Alex was very well travelled and has a true appreciation for different cultures, starting from a young age. He traveled to Australia on several occasions to visit his great aunts Tante Lenie and Tante Nel who loved his dearly from the day he was born. He also visited Peru, Holland, France, Mexico and Canada, of course trying his luck at fishing in each place.
The acquisition of the annual Christmas Tree became a family tradition. Alex, Erika, and Micaela, accompanied by their Opa, would drive to Fairplay in South Park, CO accompanied by hot chocolate and select the tallest tree that could be loaded on top of the car. The cutting, transport and loading of the tree was hard work, which Opa watched from far away. Arrival with the big tree at home was always a problem; it would be too tall to fit in the living room and Alex’s Dad would need to chop off a few feet.
Alex held a special place in his heart for his family. Many summers he visited Gramma in Central New York, treasuring memories of eating ice cream sandwiches and popsicles in Gramma’s basement and fishing on Oneida Lake and many other spots.
His gentle nature was reflected on how he loved and cared for his pets. He created very special moments holding his childhood dog Blu (Alex named him for his beautiful blue eyes) and more recently his best buddy Billy, who would never leave his side.
Alex possessed a special wit that he carried through his life He once wrote that “My whole life I’ve wanted to make people laugh” and he always did. His family would describe him as the funniest person they know.
Alexander is survived by his parents, Stephen and Elena Nieczkoski, and his identical twin sisters, Erika Nieczkoski and Micaela Nieczkoski. Also, his paternal grandparents, Cornelis and Elena Dijkhuizen (Weston, FL) and Doris Nieczkoski (Liverpool, NY), several aunts and uncles and many cousins.
A Mass of Christian Burial will be held Saturday, March 19, 2020, 10:30 am at Sacred Heart of Jesus Catholic Church, 1318 Mapleton Ave., Boulder, CO. Flowers can be sent to the aforementioned church address. Or, in lieu of flowers, donations can be made to the Humane Society of Boulder Valley in Alex’s name. A celebration of his life will follow after the church service at his home in Boulder, CO. Internment in Mountain View Memorial Park, 3016 Kalmia Ave, Boulder, CO will be on Wednesday, March 23, 2022 at 1:00pm.