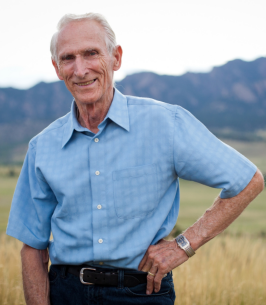 Eldon Charles Geisler passed away in the evening of March 2, 2022, after a courageous and hard fought four-and-one-half year battle with cancer. Eldon was born on March 7, 1935, in Alma, Kansas where he grew up on a farm. He was the oldest of four children born to Herman and Anna Geisler. After graduating from Alma High School in 1953 he went to work for the Alma Cheese Company until 1955 when he moved to Riverside, California. In California he worked for Pacific Telephone & Telegraph as a Lineman. He was drafted in 1957 and proudly served in the Army Signal Core for two years and again for a year in 1961 for the Berlin Crisis. Shortly after returning to work as a Lineman, he was pictured in the December 1959 issue of Pacific T&T magazine as the Best Dressed Lineman. He moved to Boulder, Colorado in 1960 and worked for Mountain Bell for over 30 years, finishing his career installing telephones at Rocky Flats. While working as a Lineman in the Colorado Rockies he met the love of his life in Granby Colorado when he stopped for lunch in a small café where she waitressed. Eldon married Wanda David in Mound City, Missouri. They were married for over 60 years and together they had three beautiful daughters. He is survived by his wife Wanda, his three daughters, Lori Canova (Brent), Superior, CO. Karen Levy, Superior CO. and Sara Kissinger (Jerry), Longmont, CO, two sisters, Doris Schmitz, Louisville, CO, Marie Kaulaity (Ewan), Lawrence, KS, a sister-in-law, Rita Glotzbach, Paxico, KS, several cousins, nieces, nephews, and six grandchildren. He was preceded in death by his parents and one brother, Marvin Geisler. Eldon loved cars, bowling, traveling, camping, antique collecting, and most of all the six grandchildren who brought him great joy. A Celebration of Life will be held March 16 at Greenwood and Myers Mortuary. Donations in his name may be made to TRU Hospice Care Center.