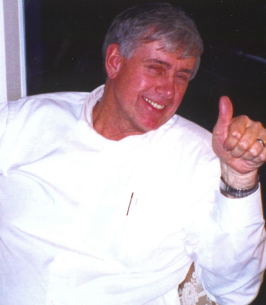 Hans Andrew Fedge, a devoted family man and true gentleman was anchored in integrity. He lived an authentic and adventurous life in alignment with his moral compass. Born February 16, 1939 to mother, Bessie Smith. He spent his early years on the family homestead in Malta, Montana where he learned to huck hay bales and acquired his quirky love for the smell of manure. On the ranch, his love affair with Montana and the great outdoors took root, and his superior work ethic was established. Hans worked an abundance of jobs growing up including selling night crawlers to fisherman and working an early morning paper route for years.

“Tiny,” as he was affectionately called, graduated from Great Falls High School in 1957 as the president of his class, with a double ride scholarship in football and basketball to Montana State University, in love with his sweetheart, and on his way to the United States Marine Corp. After his service in the Marines, which he considered an honor and one of the best growth experiences of his life, he played for the Bobcats, graduating with degrees in Accounting and Economics. He married his one and only true love and best friend- Marilyn McHenry in 1961. Together, they created the sweetest love story of all time. They had the first of two daughters and headed west to California to seize new opportunities and sandy shores. His second daughter was born in 1967 and soon after, he was promoted to Controller. His time in California was exciting and blissful. Eventually, Hans moved his family back to Montana to raise his daughters with extended family and have easy access to blue-ribbon trout fishing. The Fedge’s moved to Colorado in 1981 where Hans expanded his career in finance. He loved the Denver/Boulder area and the opportunity to be a part of that thriving community for forty years.

Hans was a big fan of the unknown; he took risks and celebrated making mistakes. He encouraged his children and grandchildren to do the same. He was known for his honesty, his keen sense of humor and wit, as a true friend and uplifter of all people.

Hans loved to work. During his lifetime, he applied his knowledge, talents, and expertise in finance to the housing and construction industry as a: Controller, CFO, Land Developer, General Contractor building affordable homes, and as a Loan Officer. Utilizing his ability to think critically and creatively, he found solutions others never saw. As Loan Officer, he saved and secured housing for people from all cultures and walks of life. Hans cared deeply for those who found themselves in a tight spot and always gave generously of his time and talent. He was willing to work harder than most, to help optimize their situation. As a respected leader and innovator in financial circles, he was honored to be a part of the task force working with Colorado’s Attorney General and Governor to restructure lending to prevent unethical, predatory lending practices. He was instrumental in advancing honest lending in the Hispanic community, where he served for many years. Helping others was a way of life for Hans. As a youth coach he taught kids how to tackle correctly or shoot a winning hook shot, he provided pro-bono tax advice, served on Boards, lead first time home buyer workshops; in every way, Hans made time to show up for people, young and old.


Hans lived his life intentionally. His profound curiosity and care for people and how they thought, made him an exceptional listener. He was a bit mischievous and frustratingly stubborn at times too. He was fascinated by the patterns and behaviors of people throughout history and how history shaped our nation, and its ability to either secured or suppressed freedom around the world.

He was always surprising us with something that would improve the lives of those he cherished and interacted with. His Saturday morning ritual of reflecting on his life and adjusting as needed, is now a family tradition. He didn’t buy his children or grandchildren shinny things; instead, he modelled life- choosing to open their eyes, minds, and hearts by sparking thought. One of his recent Christmas letters included the assignment to have each grandchild write him a letter explaining their understanding of compound interest.

Hans got a kick out of life’s simple pleasures. He never missed a sunrise or the opportunity to thank God for a new day, having fun with his sweetheart of 60 precious years, a gentle hug, a stack of sourdough pancakes, feeding the birds, waxing and washing his ‘57 Chevy, hunting and fishing with his grandsons, road trips to the beach. He loved to “get out of dodge”, body surfing at The Wedge and teaching his girls to body surf, laughing with friends over coffee, watching a good western, sky diving, cheering on the Cats, Broncos, Avs, or is favorite-his grandkid’s sporting and academic events, a celebratory cigar, donuts, cliff jumping in Mexico, The Charlie Russel Art Auction, classical music, and of course lake time with his family in Montana.

He didn’t hold back; he lived all in, without limits. You knew he was around by his, throw your head back, laugh. He was a good man.

Our dearly beloved made his transition home, unexpectedly due to medical errors after surgery, on Memorial Day, May 30, 2022, to the salute of a jet fly over in true Marine style. We miss his presence and will miss him every day until we are reunited again in heaven. He is survived by his wife, Marilyn Fedge, daughters: Kathleen Fedge-DuBose (Bratton) and Kirsten Felton (Tim), grandchildren: Victoria and Joe Felton, Bratton and Hans DuBose, many treasured friends, and extended family. Preceded in death by his mother, Bessie Fedge, aunts, uncles, and cousins. A celebration honoring his life will be held in Colorado and Montana later this year. To be notified, please add your name to the notification list kept by Greenwood & Myers Mortuary.