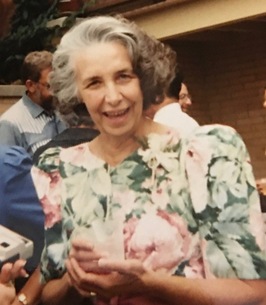 Surrounded by all seven of her children, Judith (Judy) M. Dippo died on May 4, 2022, at her home in Boulder, where she had lived for 55 years.

Judy was born in Dobbs Ferry, New York, on December 4, 1934, to Mary and Albert Mulliken. She had three siblings: Harry, Jack and Sharon. Growing up during the Great Depression and World War II, Judy and her family moved many times, eventually making their way to Silverton, Colorado, the little mining town in the San Juan Mountains where Judy spent most of her youth. She fondly recalled her Silverton days and enjoyed telling her children and grandchildren stories about the Western movies that were filmed there and Hollywood stars she encountered in local cafes as well as the epic snowstorms she experienced every winter. Judy cultivated her lifelong love of reading as a young girl, and she graduated from Silverton High School in 1952. Her identity as an enthusiastic sports fan also traces back to her days as an SHS cheerleader.

Judy married Lyle Slade in 1950 and the young couple had four children: Deborah, Barbara, James and John. They lived in a variety of locations in Colorado, Utah, New Mexico, Wyoming and Kansas. Tragically, Judy was widowed in 1960 when Lyle was killed in a mining accident.

With an unsparingly supportive community of family and friends, Judy somehow managed taking classes at Fort Lewis College and raising her young brood until she met and married Bob Dippo in 1963. Judy and Bob went on to add three more children, Meg, Beth and Amy, to their family. As the family grew, Judy and Bob moved from Durango to Boulder to Franklin Lakes, New Jersey and back to Boulder in the span of five years, making countless lifelong friendships along the way.

In the 1960s and 70s, Judy devoted her energy to raising her family. She cooked meals from scratch for nine people every day in an era before “take out” was a concept and going out for pizza was a rare event. Judy liked to remind her children, “If you can read, you can cook.” She was both an avid reader and extraordinary baker, whose pies, brownies and banana bread remain legendary. Judy was also a skilled seamstress who made special dresses and Halloween costumes. Over the years, she enjoyed tending to her African violets, geraniums, marigolds and pansies.

She enthusiastically supported her children’s activities (often getting up before dawn to drive carpools) and delighted in leading their Girl Scout troops and camping trips and cheering on her children and grandchildren at Little League, football, basketball and soccer games as well as swim meets. She encouraged their creative and artistic passions as well. At various points, Judy indulged in her own athletic pursuits, including skiing, bowling and training for the Bolder Boulder with the Brave Hearts.

In the 1980s and 90s, Judy worked at the CU Bookstore. She relished spending time on campus. She and Bob were season ticket holders for the CU Buff football program for over 50 years, and they and their children spent many hours rooting for the Buffs at home and around the country, including many bowl games. Judy was an active member of the Buffalo Belles and attended Belles events whenever she could.

Spanning her many moves, Judy’s life was deeply enriched by the friendships she made and maintained. She adored her book club and was always interested in discussing books with family members. She especially enjoyed mysteries and historical fiction. Judy’s interest in history extended to her love of travel. Whether driving cross country, through national parks and the mountains of Colorado or traveling with Bob around Europe or Canada, Judy eagerly embraced opportunities to stop at historical sites, gardens and museums.
Judy took great pride in and derived much joy from watching her children, grandchildren and great-grandchildren grow up and pursue their dreams. Her support and love were unwavering, and she will be deeply missed.
Judy is survived by her seven children: Deborah Silverman (Matt Silverman) of Boulder; Barbara Roosa (Bruce Roosa) of Gillette, WY; James Dippo (Patricia Dippo) of Arvada, CO; John Dippo (Karen Dippo) of Leesburg, VA; Meg Caddeau (Patrick Caddeau) of Princeton, NJ; Beth Cendali (Richard Cendali) of Boulder; and Amy Smith (David Smith) of Lafayette, CO.
She is also survived by 12 grandchildren and 10 great-grandchildren.
A celebration of Judy’s life will be held in June.
In lieu of flowers, the family requests you consider contributing to:
Meals on Wheels https://mowboulder.salsalabs.org/givetoday2022/index.html
Or the Golden Buffalo Scholarship Program: https://giving.cu.edu/fund/golden-buffalo-scholarship-fund