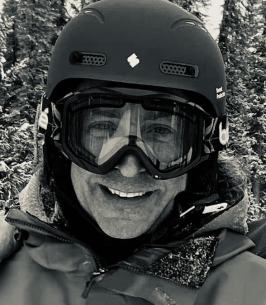 Last weekend, Marc Eliot Milavitz moved on to “the land of Jerry” as he would often say, after a short battle with cancer. Marc faced his last few months with bravery and a sense of humor. Diagnosed part way through ski season, he made it a point to hit 60 days on his board, shredding as much as possible.


Marc came into this world on October 1st, 1957 in Menomonie, WI, to Lloyd and Rosalyn (Chemrinow) Milavitz. Despite being a Colorado resident since 1985, he always had a lot of pride and love for his home state, especially when it came to Badger football and hockey. He met the love of his life, Anita Garelick, in Madison, WI, after earning a Bachelors in Communication from the University of Wisconsin-Madison, in 1983. Not long after, the pair ventured down to Austin, Texas, where Marc became a skilled filmmaker and ceramicist and received a Master of Arts from the University of Texas-Austin. After graduation, Anita’s love of skiing brought them to Aspen, CO, where he learned how to ski while working as a lift operator for two winters. They moved down to Boulder in 1987, where he went on to earn his law degree from the University of Colorado-Boulder, first working as a public defender and later hanging his own shingle and opening his private practice in criminal defense, The Alternative Law Office. During his prolific career, Marc maintained the belief that everybody deserved a second chance. Marc was a really unique man and always unapologetically himself. He was a voracious reader, a major deadhead, an obsessive snowboarder, and a wonderful husband and father. His vibrant spirit made an impact throughout his life and he will certainly be missed.


Marc is survived by his wife of 38 years, Anita Garelick; children Zachary Milavitz and Jessica Milavitz (Zeke Bogusky); siblings Brian (Sue Smukler), Suzanne, and Joan Milavitz; and his loving extended family and friends. He is also survived by his cherished yellow labs, Lulu and Stella and preceded in death by Jasmine, Cassie, and Sky. A funeral service is scheduled for 12 PM on August 3, 2022 at Congregation Har Hashem (3950 Baseline Rd, Boulder, CO 80303). In lieu of flowers, please donate to the Rex Foundation or American Cancer Society.