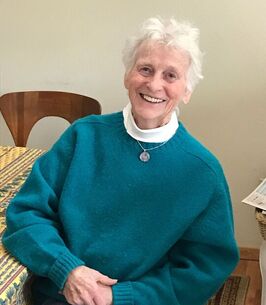 Margaret Elizabeth Dunn Strauch formerly of Boulder died July 14, 2022 at Balfour Longmont. She was 88. Born August 16, 1933, on a farm in Waukesha County, Wisconsin, she was the eldest of seven children born to Wallace Richard Dunn and Hildegarde Tyrolt Dunn. She lived in Wisconsin, Florida, and New Jersey, before moving to Boulder in 1967 where she lived for 50 years. She married Richard G. Strauch in Waukesha on August 17, 1957.
Before she was married Margaret worked in Waukesha and attended the University of Wisconsin in Milwaukee and Madison. Later she worked at the University of Florida in Gainesville, the Department of Social Services in Boulder, and the University of Colorado in Boulder. Margaret volunteered at Sacred Heart of Jesus School while her children were students there and again, after retirement, she volunteered when her grandchildren were students there. Margaret and her husband enjoyed traveling and square dancing.
Survivors include her husband Richard of Boulder, her daughters, Suzanne Pyle, (granddaughter Anna), and Terry Staarmann, (husband John, and grandchildren Kyle and Zack (Zoe)), and her son, Richard (wife Cindy and grandchildren Peter and Erika), of Santa Rosa, California. She is also survived by two brothers, James (Catherine) of Hendersonville, NC, and Robert (Connie) of Wales, WI. Margaret was preceded in death by her parents, son-in-law Robert Pyle,her brothers Wallace, Anthony, William, and her sister Anne Conway. Private interment will be at Green Mountain Cemetery. At her request there will be no public memorial service. Greenwood & Myers Mortuary is in charge of arrangements.