Obituary for Shirley A. Cupp 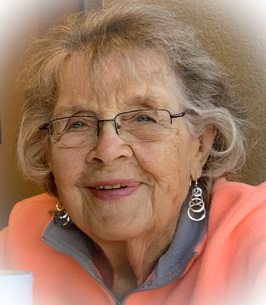 Shirley Alice Wise was born April 21, 1929 in the small Ohio town of Van Wert, the third
child and only daughter of Moses and Goldia Wise. Shirley’s mom and dad were very musical
providing the music for local square dances and events – Moses on the fiddle and Goldia on the
piano. Shirley followed in their musical footsteps, playing the piano as well as the clarinet all
through school. Shirley had a beautiful alto voice and sang in her church choir for many years.
In her late teens/early 20s, Shirley sang and played the chimes with a small musical group
called The Chimes Hour that hosted a half-hour weekly radio show on Sundays. It was in The
Chimes Hour where she met Richard Cupp, and they were married in November of 1953.
Between 1955 and 1960, Dick and Shirley had 4 daughters, moving to Orlando, Florida in
1960. Shirley and the family lived in Florida for 10 years, relocating to Boulder, Colorado in
1970. Shirley missed the ocean and beach very much, but over the years came to adore the
beauty of Colorado. Shirley worked 40 years at Boulder National Bank (now US Bank).
Shirley officially retired at 70 but continued to work part-time until she was 80 years old.

Shirley absolutely loved big band music -- the music of her youth -- particularly the songs of
Glenn Miller. She danced to it as a young woman, and then again later in life. Every Saturday
night, you could find Shirley and her best friend, Gloria, at local big band dances in the Denver
area. Shirley was a great dancer – we knew it, and she knew it too.

Perhaps the characteristic we remember most about Shirley was her big heart. Shirley was a
giver. When her children were young, she volunteered as a school nurse, regularly cared for
elderly neighbors and was a girl scout leader (even letting the group set up “cookie central” in
her garage). While Shirley worked at the bank, she served for many years as the Prime Time
Club director, essentially taking care of and customizing service to elderly customers. Beyond
her banking obligations, Shirley hosted social events for this group, visited elderly customers
when they were sick, took flowers and cookies to them if/when they were moved to assisted
living facilities, and never forgot them on a birthday or holiday. Later in life, Shirley
volunteered at Longmont United Hospital in the adult daycare center and the maternity ward.
She had a keen eye for discerning people (and animals) in need, whether it was a mother who
needed help with young ones in the grocery, an elderly man trying to navigate a door into a
store, a homeless person on the street, or a lost dog in a neighborhood. Shirley would jump into
action to assist in any way she could.

As a mom and grandma, Shirley was beloved. Along with her never-ending kindness and
compassion, she attended many, many sporting events, music and dance recitals, band
concerts, graduations, award ceremonies, school plays, and cheerleading competitions. Shirley
loved to travel and was always game for a trip with her girls, especially if it included a beach
and an ocean. Shirley loved animals (furry ones, that is). She had cherished cats her whole life,
but also loved dogs, big and small. Shirley had a great sense of humor, loved to laugh, and
came up with little quips that set everyone giggling. She lived a long, full, and beautiful life
and will be so missed by everyone that knew and loved her.

In lieu of flowers, Shirley would appreciate donations be made to Longmont Humane Society
in her name at https://www.longmonthumane.org/donate/memorials-tributes/